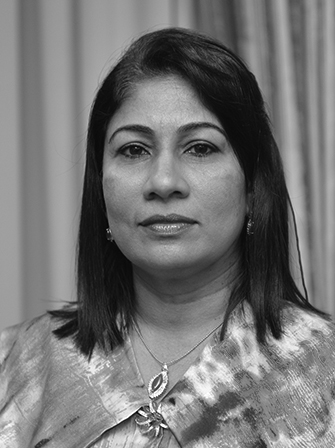 At present she heads SIMDI Group of companies in Maldives as its CEO, besides being chairperson to several entities which include Maldives Network to Empower Women (MNEW); Institute of Counselling and Psychotherapy (ICP); Addu Women’s Association (AWA) and International Medical and Diagnostic Centre (IMDC). She is also a member of Civil Service Action Group (CSAG), of UN WOMEN, Multi Country Office.

Her past experiences also comprise teaching different disciplines at primary, secondary and tertiary level, as well as developing and managing various businesses in her capacity as CEO/Director/Shareholder of one of the leading and most diversified trading companies in the Maldives that represents some well-known world brands. She has also been involved, in designing, developing and managing some of the best and most reputed award winning resorts and luxury apartments in the country. As an academic, she has also several publications to her name. Among her hobbies include sewing, arts and craft, creative writing, and composing poetry both in English and Dhivehi. (language spoken in Maldives).